Creatures Of The Night

Superdoodle’s co-founder Billmund has been working on our biggest job to date, creating squllions (we’ve actually lost count) of illustrations for Australia Jägermeister’s social media campaign “Creatures Of The Night”. Working with social marketing agency Society and UM, the award-winning campaign debuted in 2014 and is ongoing due to it’s huge success. 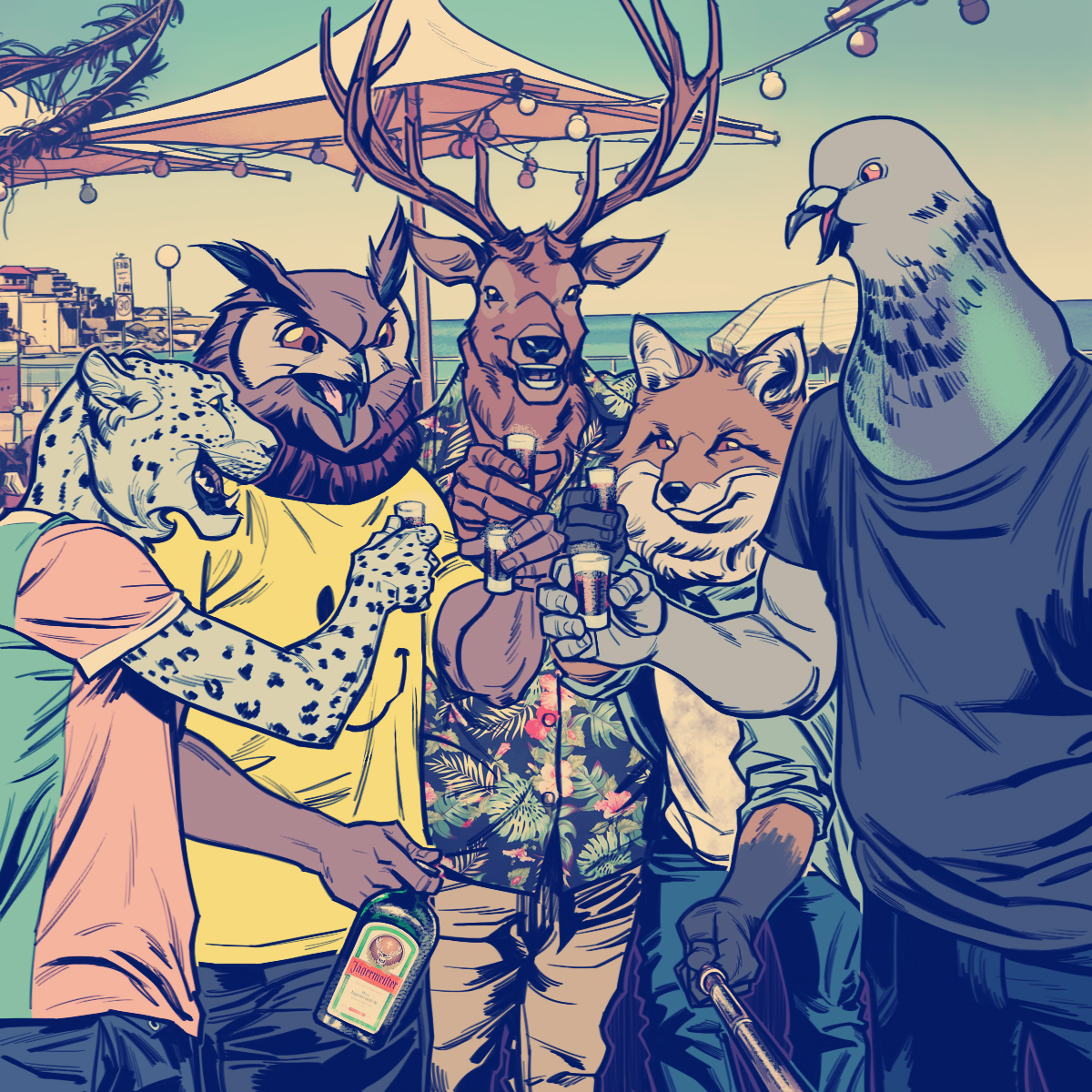 Through their research, Jägermeister found that it’s the banter on a night out that bonds group of guys together. So they asked us to design a group of characters that could reflect the voices in a typical group of Aussie guys, and in turn create relatable vignettes that could be tagged and shared among friends on Facebook and Instagram. 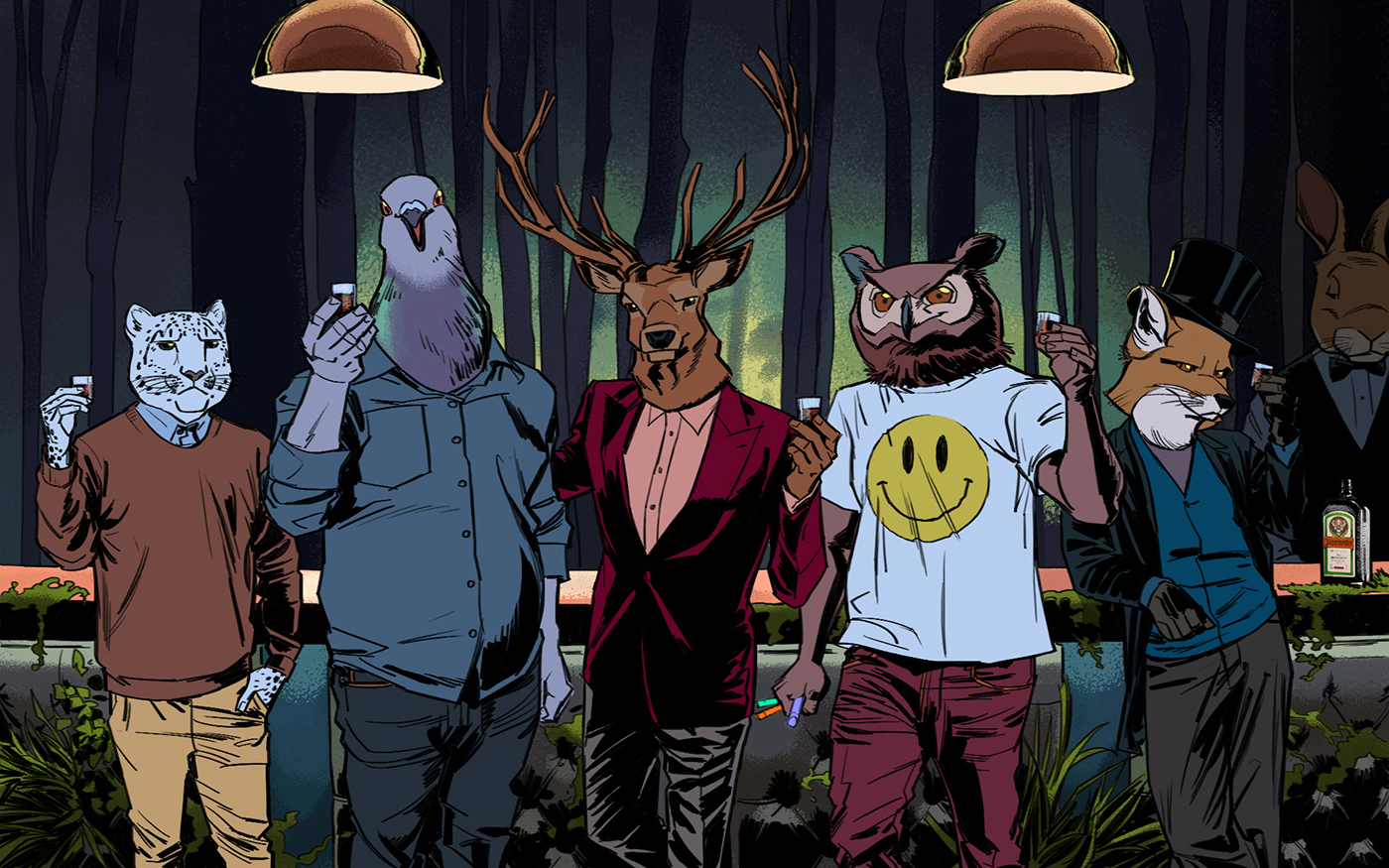 For Jägermeister to become a part of the pack they would need to demonstrate an understanding of relatable traits in a typical group and so they gave us simple character profiles for us to design around.

The alpha in the group was of course the Stag; group leader and most likely to steal your girlfriend. We gave him a smug grin and cocked eyebrow, and dressed his chiselled physique in a tidy slim-fit suit jacket. 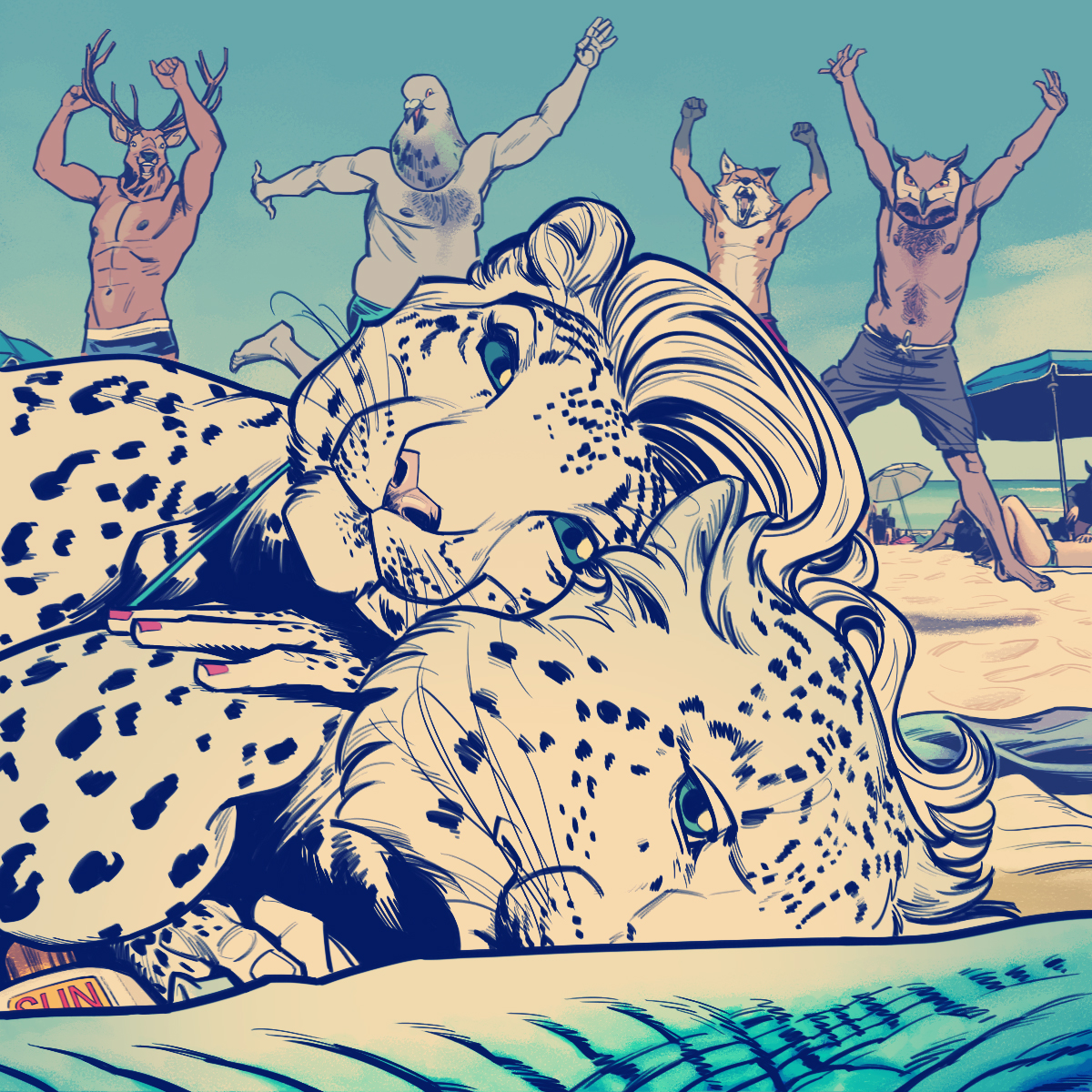 The Wingman was the Stag’s main accomplice but best friend to all, known to sacrifice himself for others. He needed to be loyal yet somewhat dim, and a pigeon’s face and dumpy body somehow fits that description!

Then the Snow Leopard - he’s rarely seen on account of an overly possessive girlfriend, and only occasionally leaves his cave. His design needed to reflect a restrained, guilty expression, in the fixed furrow of his brow and his conservative manner of dress. 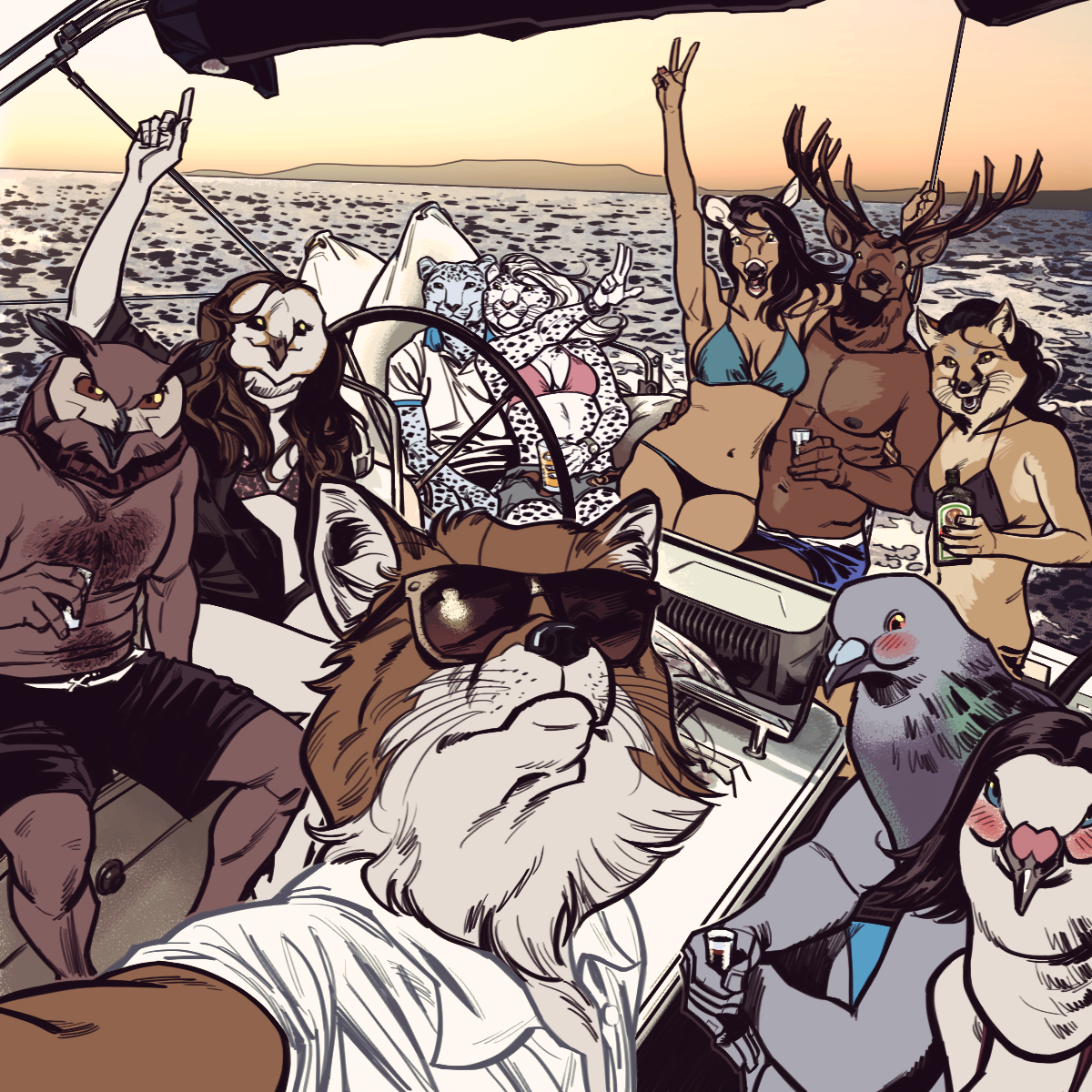 The nocturnal Night Owl was always the last to pack it in. He’s the party animal in the group, so in his construction he would always need to have bulging, dilated pupils, a permanently stoked expression and growing pit stains.

Lastly, the Dodger would be a scheming fox, his namesake reflected in the early design with an Artful Dodger top hat. He would show himself to be the secretly wealthy round-skipper and all-around scammer. 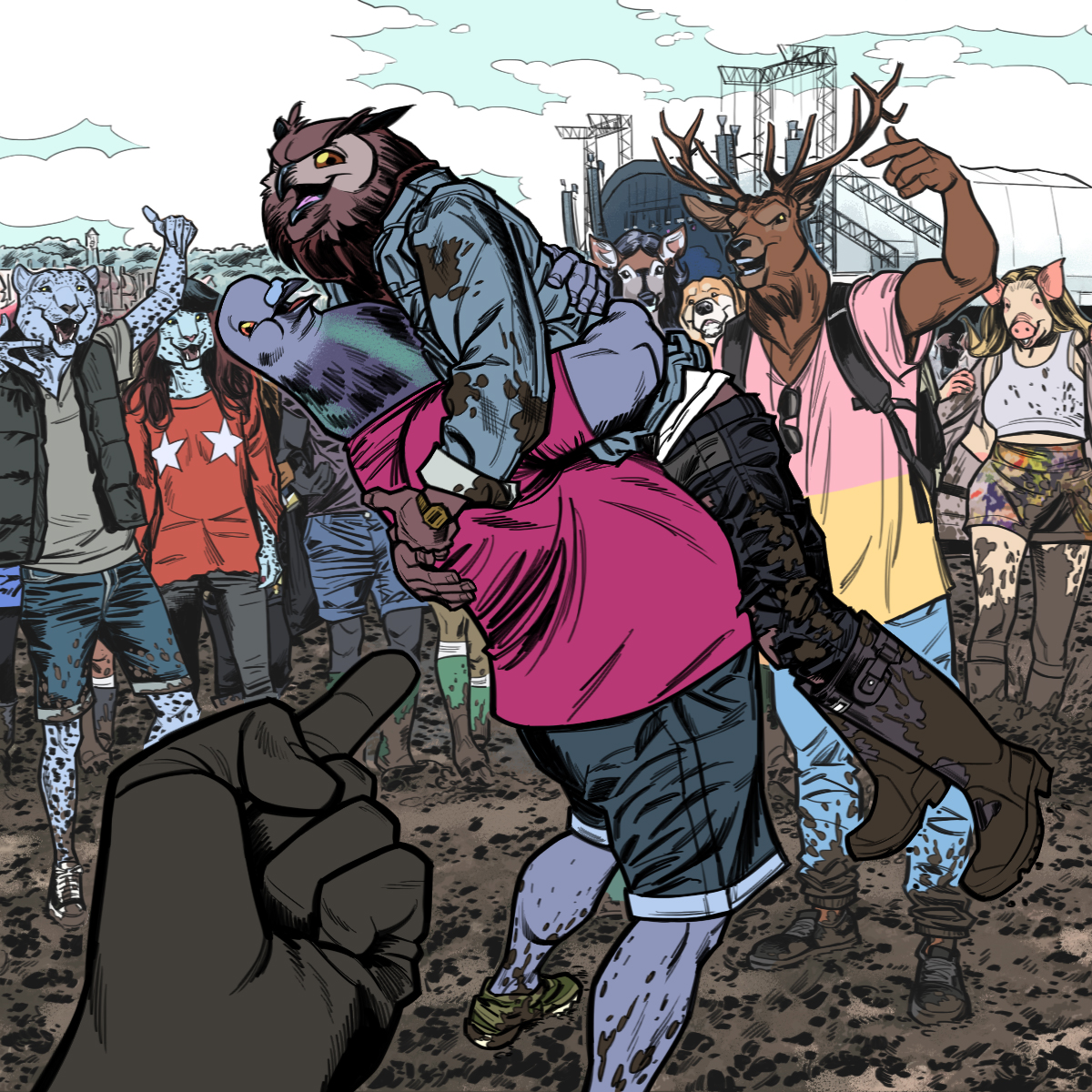 Each week the characters were fleshed out more and more. After the first season, the Creatures of the Night left the bar in the woods and went on to engage in more and more relatable outings; they went to festivals, night clubs, toga parties, oktoberfests, BBQs and more. They were celebrating cricket world cup wins, preparing for Australia Day and cutting a rug at Christmas work parties.

Audiences adopted the characters like they were their own, using our social stories to tag their friends (usually to have a little dig or joke at their expense!).

Jägermeister’s social content created such a groundswell that Instagram recognised this, inviting them to be the first alcohol brand in Australia to advertise on their platform.

The campaign was a runaway success! It reached 88% of the M18-28 Facebook audience, with a staggering 15% of the all men 18-28 in Australia directly engaging with the campaign.

When Creatures of the Night originally launched on Facebook, it led to the reversal of an 8-year decline in Jägermeister sales, lifting the brand to an increase of 10% in sales year on year.

There have been hundreds of thousands of comments on posts. The kicker was that each of these comments was more often than not a “tag”, which meant that the audience was passing the message on, directly embedding Jägermeister within a group of friends.